Cruising With An Inspiration Named Julia

On a recent Panama Canal cruise on the Holland America ms Amsterdam we met a most extraordinary passenger with a remarkable past. Her name is Julia.

We do not usually write about fellow travelers, but Julia is exceptional for several reasons that stirred our interest and imagination. Julia’s most noteworthy characteristic is that she belongs to a growing number of active seniors who demonstrate the ability to live long and travel – disregarding statistical realities along the way. 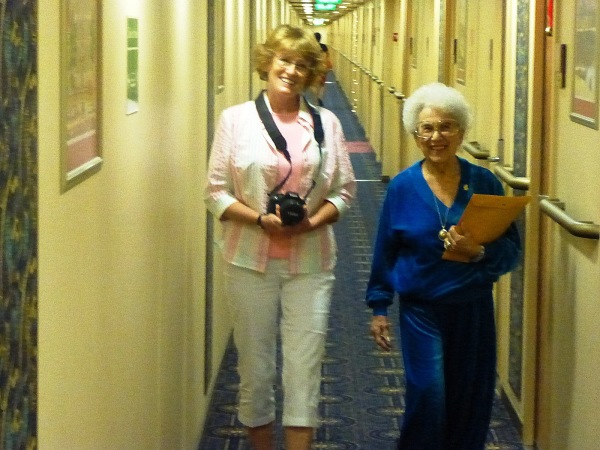 Julia was born in 1919, and she easily makes the case that 95 is the new 75 as she nimbly navigates cruise ship passageways without the help of cane or walker. If you have aspirations of travelling long after retirement, Julia’s story is great encouragement.

Born just after WWI, Julia grew up and lived in London where she married in December, 1939 – just after the start of WWII in Europe. Her husband was a medical doctor involved in the war effort, and Julia – although untrained at the time – became a medical assistant who did suturing and wound control during the dark days of the London Blitz.

Like the survivors of the infamous European camps, Julia is one of the remaining few that can give firsthand adult testimony of the horror of the Nazi bombardment of London for 57 consecutive nights in 1940 and 1941. She still gets teary-eyed when relating poignant tales of the human tragedy and loss of life – which she tells in a crisp British accent and with the riveting clarity of a youthful reporter.

London was devastated by WWII and many British professionals immigrated to other countries to make a living. Julia and her husband planned to seek their fortune in the United States. Unfortunately, there was a long waiting list to enter the US immediately following the war, so they accepted a medical position in Manitoba, Canada while they waited for approval to enter the United States.

Julia on the Queen Mary

Their journey to North America began in 1948 when they boarded the original ms Queen Mary in Southampton, England for a voyage to New York City.

After clearing US Customs and Immigration on Ellis Island, Julia and her husband – with two children and a nanny in tow – drove to Canada from New York. They spent eight years in Manitoba before being invited to take up a medical post in the state of Idaho in 1956. They loved living in Idaho.

Julia was widowed in the 1990s, but her and her second husband Don live part of the year in Idaho to this very day.

A love for cruising

Julia has amassed an amazing 3,000 days (yes, that’s over 8-years) and over 250,000 miles at sea over the last 30-years, many of those days on around the world cruises on Holland America – several on the Amsterdam and Rotterdam.

In her global travels she has visited a remarkable 291 countries, and showed us the documentation to prove it.

Because of her extensive travel, Julia has acquired a keen understanding of the struggles of ordinary people and the less fortunate on our planet. She told us several engrossing stories about meeting strangers that subsequently had an influence on her life.

Back home in California and Idaho, Julia helps those in need, and has been the president of her local American Heart Association, and founder of a non-profit organization dedicated to the comfort of the victims of heart disease.

Looking to the future 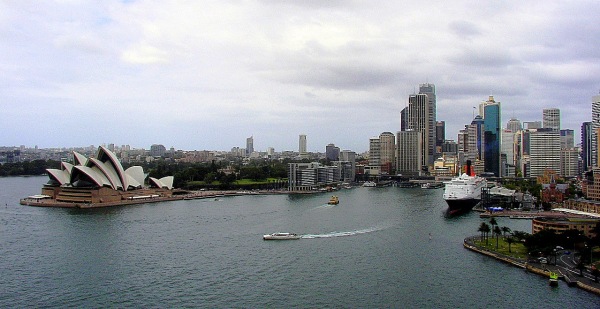 Because their annual world cruise is a predictable event, Julia and Don have created some routine pastimes as they circle the globe on ships. One particular pleasure is their reserved seating at the Sydney Opera House.

As soon as they learn the date their annual ship will arrive in Sydney, they immediately go online to book reservations for the opera. Because of the early status of their cruise bookings (they are already signed-on for the 2015 world cruise on Holland America) they have been able to reserve the same seats at the Sydney opera for the past 20 years.

Julia and Don are extremely outgoing, and great ambassadors for the cruise lines. Julia has lunched with Micky Arison, the past CEO of Carnival Corporation – the parent of many popular cruise companies. She also knows many of the service crews and officers on their ships.

When we interviewed Captain Fred Everson on the Amsterdam for a future story about our Canal cruise, we mentioned meeting Julia, to which he immediately responded, “Isn’t she the very best?” Indeed she is.

We left Julia and Don in Ft Lauderdale at the end of our wonderful 17-day Panama Canal cruise – our two new friends were continuing on.

The ms Amsterdam started its 114-day 2014 Grand World Voyage the next afternoon – with our favorite couple securely on board and looking forward to their adventures. Click on the link to view their itinerary.

Click *here* to read Wayne and Judy’s story about the adventures of the historic Queen Mary now a famous hotel/museum permanently docked in Long Beach, California.