Achilleion: For Your Eyes Only

In October 1980 a Hollywood crew descended on the quiet Island of Corfu located between Italy and Greece in the Ionian Sea. The production company filming the 12th James Bond movie, “For Your Eyes Only,” had secured the elegant Achilleion Palace Casino for an important sequence in the film. 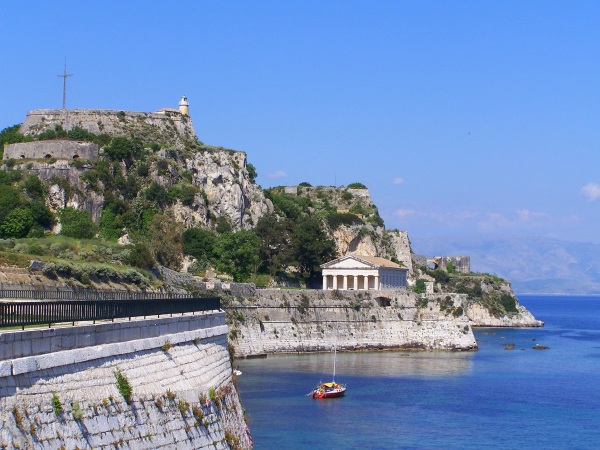 The viewing public is always treated to marvelous vistas and glamorous settings all skillfully woven into every James Bond movie. However, some of the iconic structures introduced in Bond films are unfamiliar landmarks that had interesting histories long before they were 007 venues.  The Achilleion Palace is one such landmark.

Our story begins with a murder-suicide. In 1889 Crown Prince Rudolph, the only son of Empress Elisabeth of Austria was the heir apparent to the throne of Austria/Hungary when he murdered his mistress and committed suicide.

The event so upset the Empress that she withdrew from the royal court, traveled, and eventually found solitude on her favorite vacation island of Corfu. 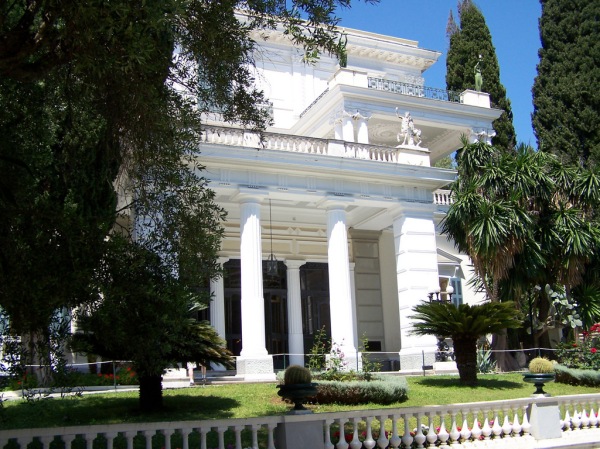 There she had constructed a marvelous palace as a refuge from the public. She named the palace Achilleion in tribute to Achilles – a tragic character in Greek mythology.

Elisabeth had written, “I want a palace with pillared colonnades and hanging gardens, protected from prying glances – a palace worthy of Achilles, who despised all mortals and did not fear even the gods.” 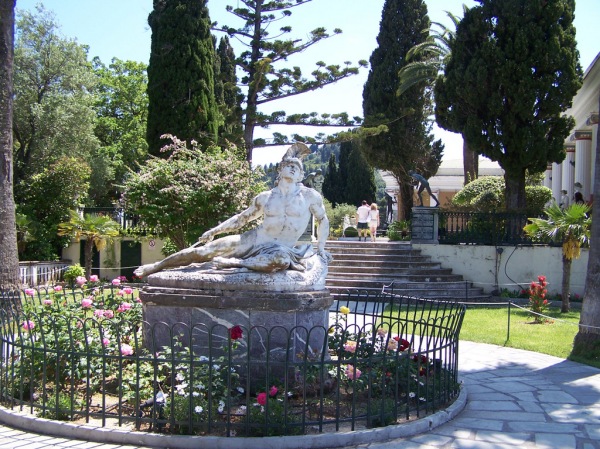 Her wishes were carried out and are evident throughout the palace and gardens. There are many statues on the grounds of the palace but only two are world-famous. The first is a work in marble of a Dying Achilles purchased by Elisabeth in 1890 and symbolic of her personal grief and pain over the loss of her son. 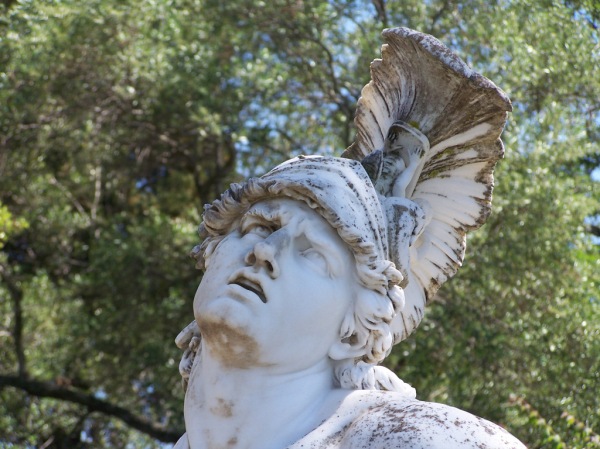 The statue of Dying Achilles depicts the now mortal Achilles looking toward the heavens asking his goddess mother Thetis for her help, which she could not give. Many believe the Empress of Austria felt empathy for the goddess-mother because she shared a similar experience with her own son.

After the death of her son Rudolph, Elisabeth became reclusive and preferred anonymity when she traveled – a trait that would lead to her untimely death at the age of 60. In 1898, the Empress was walking with a friend and unaccompanied by security on a street in Geneva. An Italian anarchist recognized the Royal, attacked and stabbed her, inflicting a mortal wound.

The entire continent mourned the senseless assassination. Elisabeth, affectionately called “Sissi,” was regarded as one of the most beautiful women in Europe, but she was more famous for her generosity. 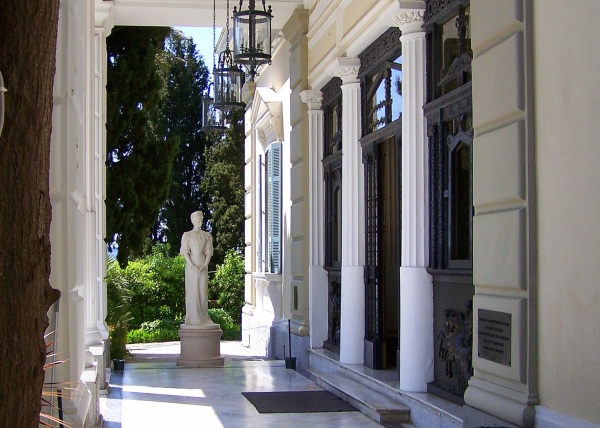 Achilleion was purchased from Elisabeth’s heir by Kaiser Wilhelm II of Germany in 1907. The Kaiser and his family used the palace as a summer retreat until the start of World War I.

A commemorative statue of Sissi was respectfully placed at the front entrance so the Empress could forever greet palace guests. 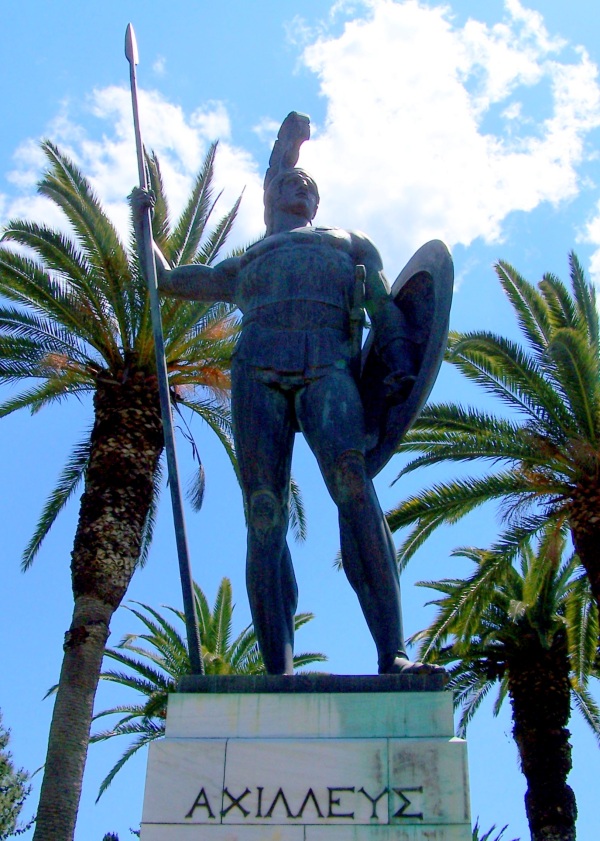 It was at that time that the Kaiser commissioned the second famous statue found at Achilleion, a magnificent 26-foot tall brass Achilles. It depicts Achilles as a strong warrior/god on guard overlooking the City of Corfu. The Kaiser had inscribed “To the Greatest Greek from the Greatest German.” The inscription was removed by the Greek people after WWII.

During the First World War, the palace was conscripted as a military hospital. After the conflict, the palace reverted back to Greece as part of war reparations.

In the 1920s the palace was used as an orphanage and later as government offices until the start of WWII when it was seized by the Axis Powers for use as a military headquarters. After that war, the palace came under the control of the Hellenic Tourist Organization (HTO).

The palace remained closed to the public for 17 years following WWII.

Days as a casino

In 1962 the HTO leased the palace to a private company that ran it as a casino until 1983. At the end of the lease, the palace reverted back to the HTO. Fortunately, it was still a casino in 1981 when James Bond paid a visit.

Today, the palace is a public museum and the most frequented attraction on the island of Corfu.

That ends our first story in our new series, “If only walls could talk.” Hope you enjoyed it.

The Achilleion Palace is located about 6 miles south of the colorful city of Corfu.

It is situated on a plateau overlooking the city and Ionian Sea.

Corfu is accessible by air and sea. Before the pandemic, it was a popular cruise port.

There are many Corfu tours that include the palace and grounds. You can find a selection here. 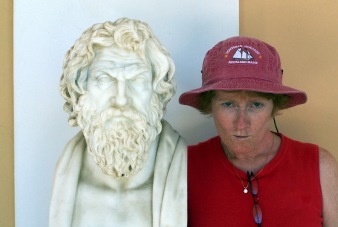 When we arrived on Corfu, the palace gardens and grounds were open to enjoy the statuary, but the museum was closed for cleaning and maintenance.

A great disappointment we hope to rectify after the pandemic.

Whenever we travel, we are protected by AllianzTravel insurance.

The opinions expressed in our articles are the journalists alone and have not been reviewed, endorsed, or approved by any entity.