Best Places to Stay Along the Oregon Coast: Heceta Lighthouse Bed and Breakfast

Who doesn’t like a lighthouse? Artistic sentinels of the past and present that conjure up thoughts of tumultuous seas and shipwrecks along craggy coasts. For some, a lighthouse may bring visions of a peaceful life with the siren call of gulls and foghorns. Adventure to some, serenity to others. Who lived such a life and how did they live it? There’s a great way to find out, if only for a day or two.

Stay at a historic lighthouse bed and breakfast

There are not many American lighthouses with guest facilities, but there are a few. One of the best is the often-photographed Heceta Lighthouse near Florence, Oregon.  The old lighthouse keeper’s home is just a few minute’s walk from the lighthouse and is now a thriving B&B with one of the most scenic outlooks of the rugged Oregon coast.

In 1891 President Benjamin Harrison reserved a coastal headland known as Heceta Head, in Lane County, Oregon, for the sole use of a lighthouse, which was subsequently constructed and dedicated three years later.

The lighthouse boasts a 1.2 million candle power light — the most powerful on the Oregon coast. It can be seen from far out at sea, and also, from various points along US-101.

The last keeper left when the giant light was automated in 1963. Thereafter, the keeper’s notably unique residence went vacant. 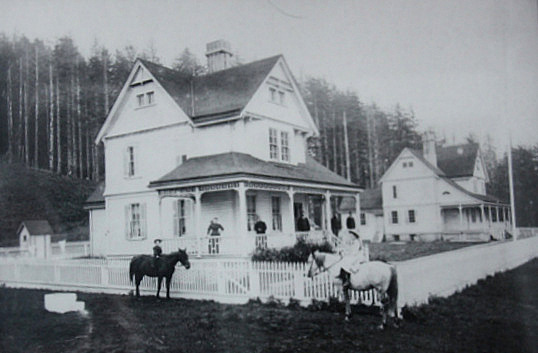 The house on the left was razed in 1940, the one remaining was put on the National Register of Historic Places in 1973. 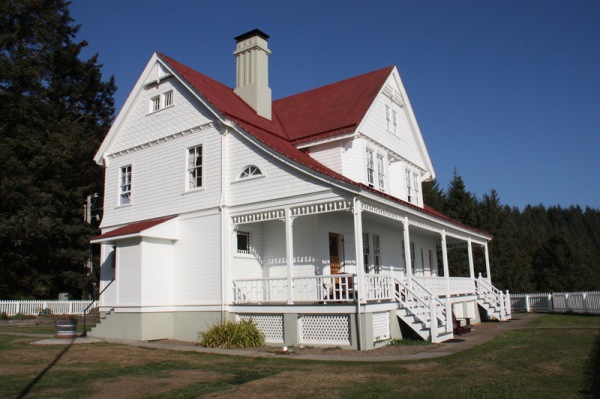 Twenty-two years later in 1995, Lane County opened the building for tours and a six guestroom B&B. What a wonderful idea!

We had the privilege of spending two nights in the Mariner II guestroom at the Heceta Lighthouse Bed and Breakfast. 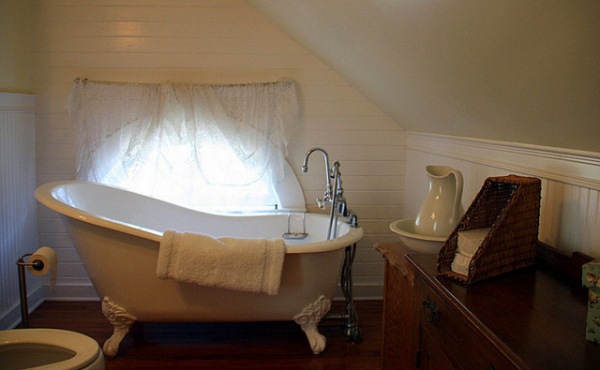 Our room was one of three with an en-suite bath. If you would enjoy traveling back in time to the early days of lighthouse keeping, this is a place you will not want to miss. 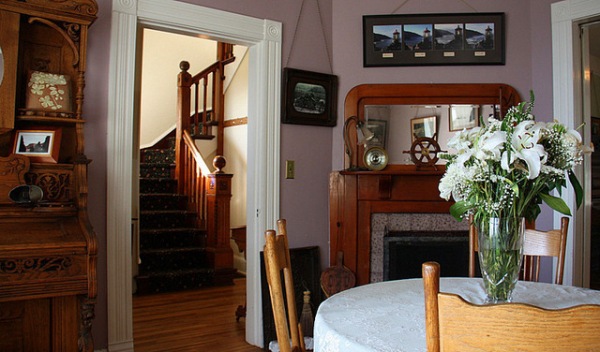 Painstakingly furnished with period antiques, the vintage Queen Ann style keeper’s house is a giant step back to the late 1800s.

The house is reputed to be haunted, and the setting is perfect for the phenomenon, but alas, we did not see any apparitions. 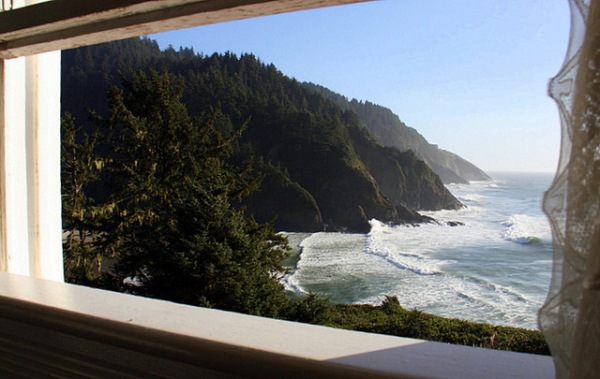 The view from our room was inspiring. The windows were like a powerful lens through which our expectations of the beauty of the rugged Oregon coastline became a reality.

A stay at the Keeper’s home includes a house tour, lighthouse tour, wine and cheese social, and a gourmet breakfast. All worth the price of admission.

See the lighthouse in daylight and after dark

It’s a brief walk from the keeper’s house to the lighthouse atop the craggy knoll. 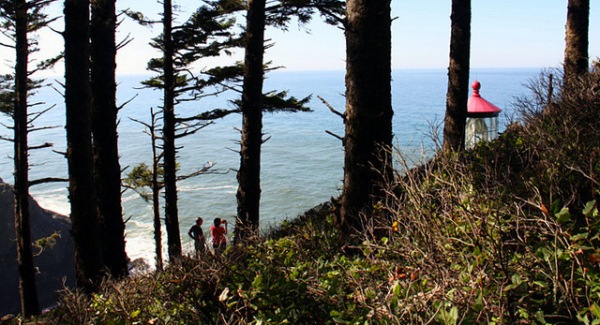 There is also a cliff trail that rises above the lighthouse. 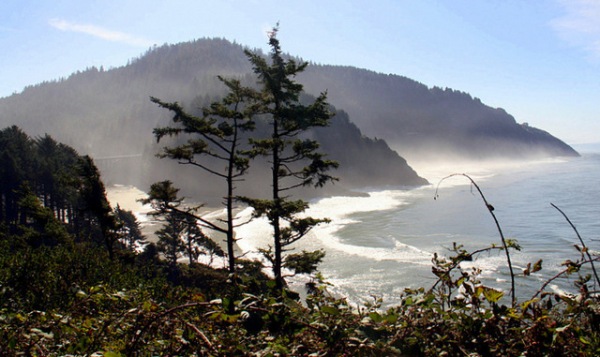 The view from that vantage point invites your gaze over the shimmering ocean and the southern aspect of the Siuslaw National Forest and its rocky shoreline.

A flashlight is provided in every guestroom in the inn, along with encouragement to climb the easy trail after dark. 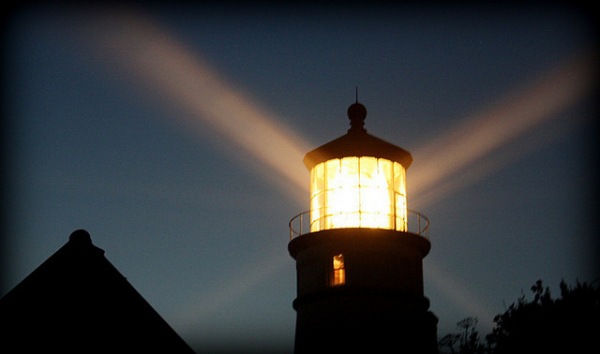 At night the lighthouse is showcased in the dramatic glow of its illuminated Fresnel lens, which tirelessly scans the sea under the gaze of a million stars.

Do not miss breakfast

Original innkeepers Mike and Carol Korgan are both certified executive chefs. They are retired now, but their successors have upheld the tradition of fine dining at the house.

A seven-course day-opening meal awaits each guest. At this table, delicious food keeps coming until every guest is fully nourished and satisfied.

Accompanied by rousing coffees and teas, the multi-plate tapas style breakfast was a great way to start the day. The experience was further enhanced by the congeniality of our fellow guests. 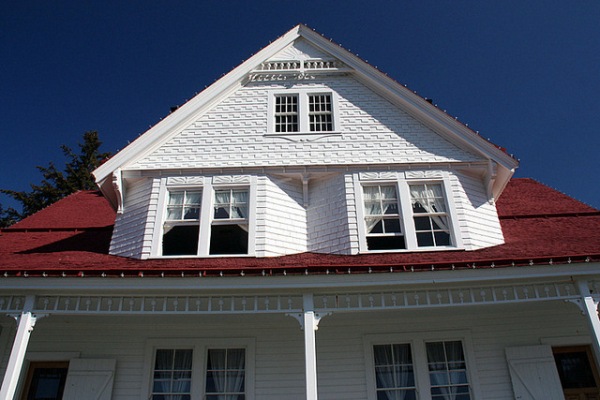 For those heading to Oregon and ready for an authentic 19th-century lighthouse keeper’s experience accompanied by a gourmet-envy seven-course breakfast, we think you will enjoy the Heceta Head Lighthouse B&B. Learn more about it here.

Because this vintage B&Bs has very few guestrooms, be sure to make reservations several weeks in advance to avoid disappointment.

The Heceta Lighthouse is located just off US-101 on the central Oregon coast and 12 miles north of Florence, Oregon.

Portland is the nearest major airport, and Eugene is a good choice as the closest regional airport that has direct service to cities like Seattle, San Francisco, and Denver.

Whenever we travel, we are protected by Allianz Travel Insurance.

The opinions expressed in our articles are the journalists alone and have not been reviewed, endorsed or approved by any entity.